Arc de Triomphe in Paris, Berlin Wall in Germany, Casino Royale shooting in Venice, Red Light District in Amsterdam, who has never dream of them? So my journey began because of my dream. In this Europe Chapter, I will share stories about cities and countries I have been to, as well as some tips for a smooth holiday.

For the accommodation, we mostly stay in hotels and Airbnb. The picture above was taken in Airbnb room that we rent, but I lost the room picture. However, you could look through reviews about the room/apartment/home that you wish to rent. The more the positive reviews, then the better they are. Also you have to make sure the place you rent is not far from downtown or metros!

We use Eurail Pass to travel from one city/country to another, and the length of time depends on how far a place to another. EURAIL can be purchased online or by an agent in your home country, and I suggest you to visit EURAIL website for further details and information. 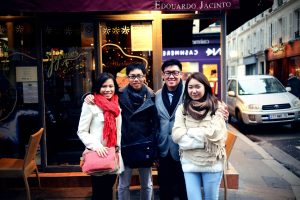 We fly from Singapore to Shanghai and reached Paris at night. We move from country to country, city to city. Paris (France) as a starting point, then we went to Geneva (Switzerland), Milan and Venice (Italy), then Ljubljana (Slovenia).

After that, we move up to Vienna (Austria) to spend our Christmas eve and moved up again to Prague (Czech Republic), a Walt Disney city to me, and an Eastern Paris to most people. After a long walk, we reached Berlin (Germany), then while in Berlin, we went to Szczecin (Poland).

In January 2013, we went to Amsterdam (Netherland), and head to Brussels (Belgium), had our evening flight to Barcelona (Spain), spent a couple of days there before we took train to Paris. The last 3 nights we spent in Paris, we went to museums and had a last glance of Eiffel Tower at night.

If I had a chance, i would go back to these places and captures the memories again, I hope you enjoy my magical days in Europe, and I would be glad to listen to your stories too! P.S: Photos are mostly credited to Ms. Pang Ketumarn, Imran Rahim and Mr. Chua Junting.

My first visit to Europe was in Winter, December 2012.