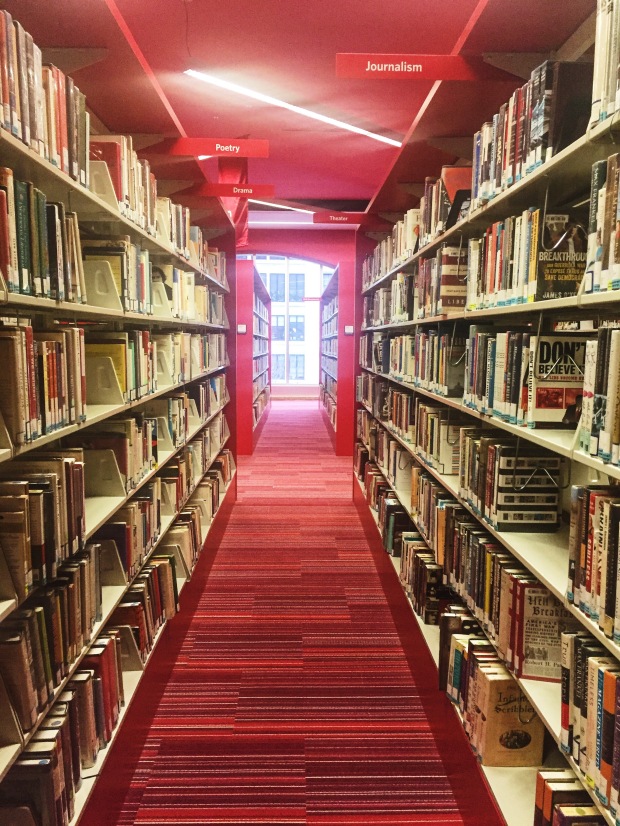 The idea of living is to learn, not only while you were young, but to learn while you still can. 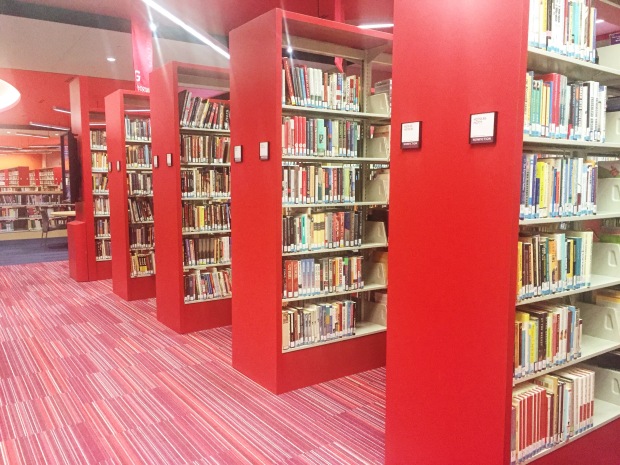 If you love reading and is a fan of big and comfortable libraries, Boston Public Library which was located in Boylston St is definitely worth your visit.

The library is so big, peaceful and quiet. I stayed for more than 3-4 hours here last time. 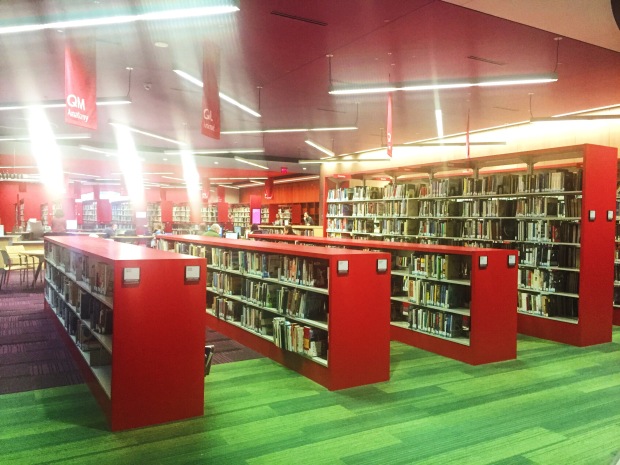 There are many sections of reading in this library, so you would certainly found books based on your interest.

The opening hours is from 9 morning to 9 evening. However, I suggest you to ask the officer regarding the day of your visit. You could email ask@bpl.org or dial 617-536-5400.

I finally understood why whatever sin that happens in this city stays in this city. Because when you walk along the street of vegas, you will encounter madness and from everyone. 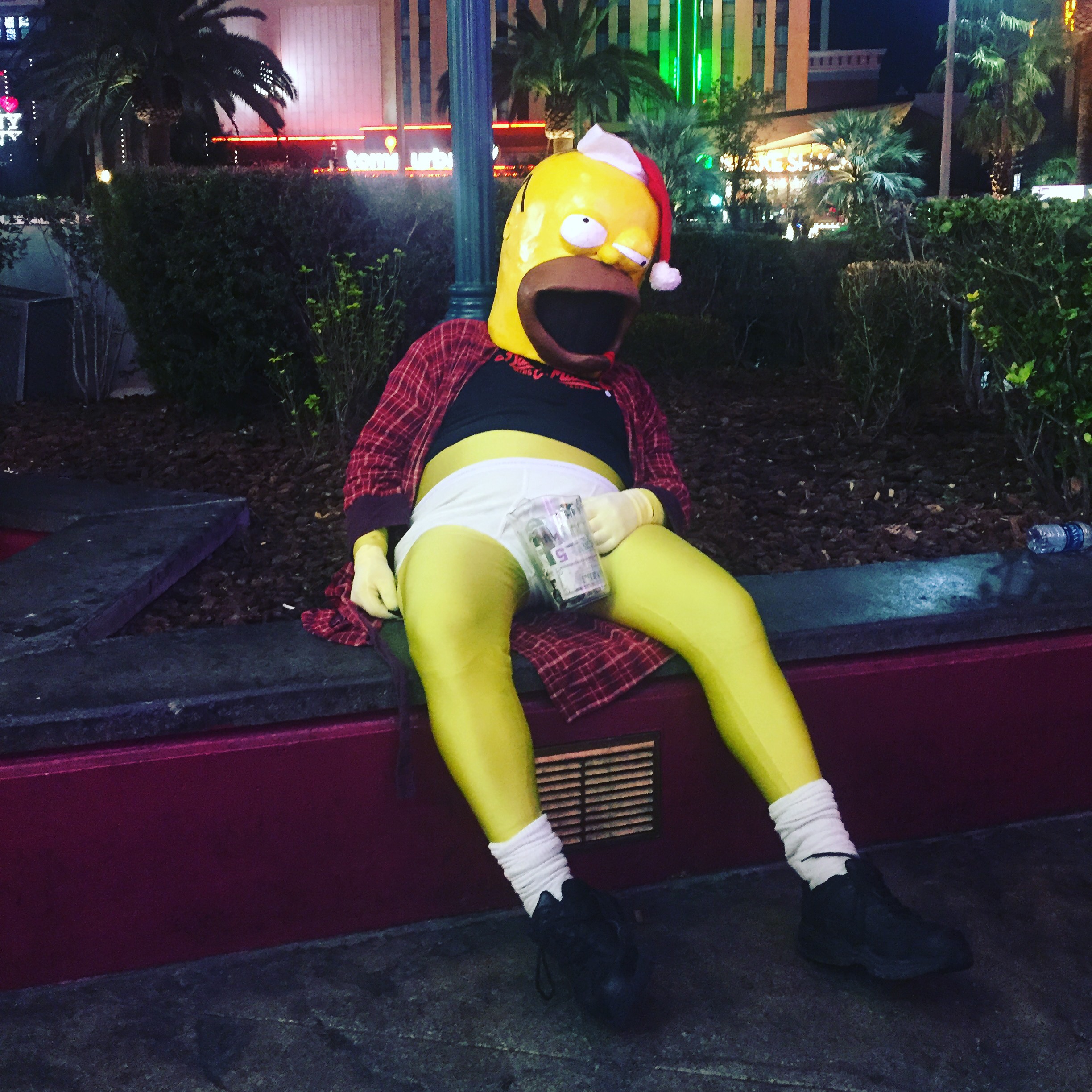 The Simpson in The Strip

Screaming, laughters surrounded Las Vegas. Need no worries, this sin city turns out to be the safest city on earth, because everybody here care for their own business. 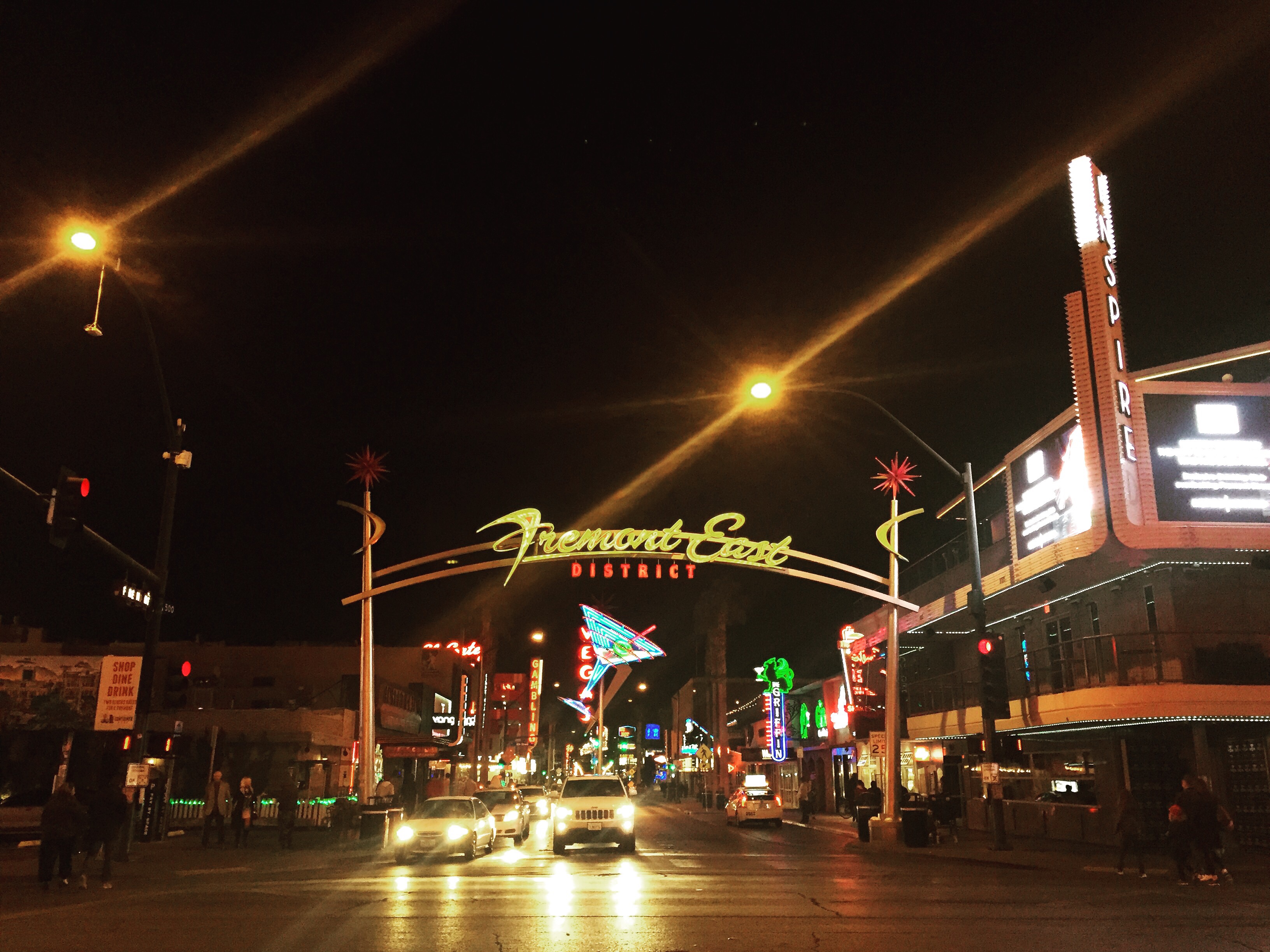 Casinos, hotels, stripclubs, tattoo parlours, everything are all here in this magnificent land, and you could easily spotted them without even need to look for it.

The first entry point of Las Vegas is definitely the Fremont Street, because it was the old strip street. 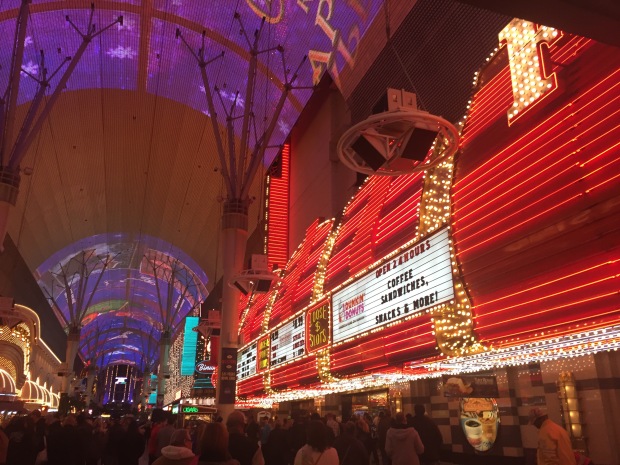 Everynight there are performance and attractions in Fremont, and they are free. You could also find many stores and restaurants in here.

Not only that, the best is yet to come, because everything is so beautiful here, especially the designs and interior of all the hotels and casinos.

All along the strip, casinos and hotels are everywhere. From Bally, Wynn, Caesar Palace, you name it! Many of it are just straight across this very street. 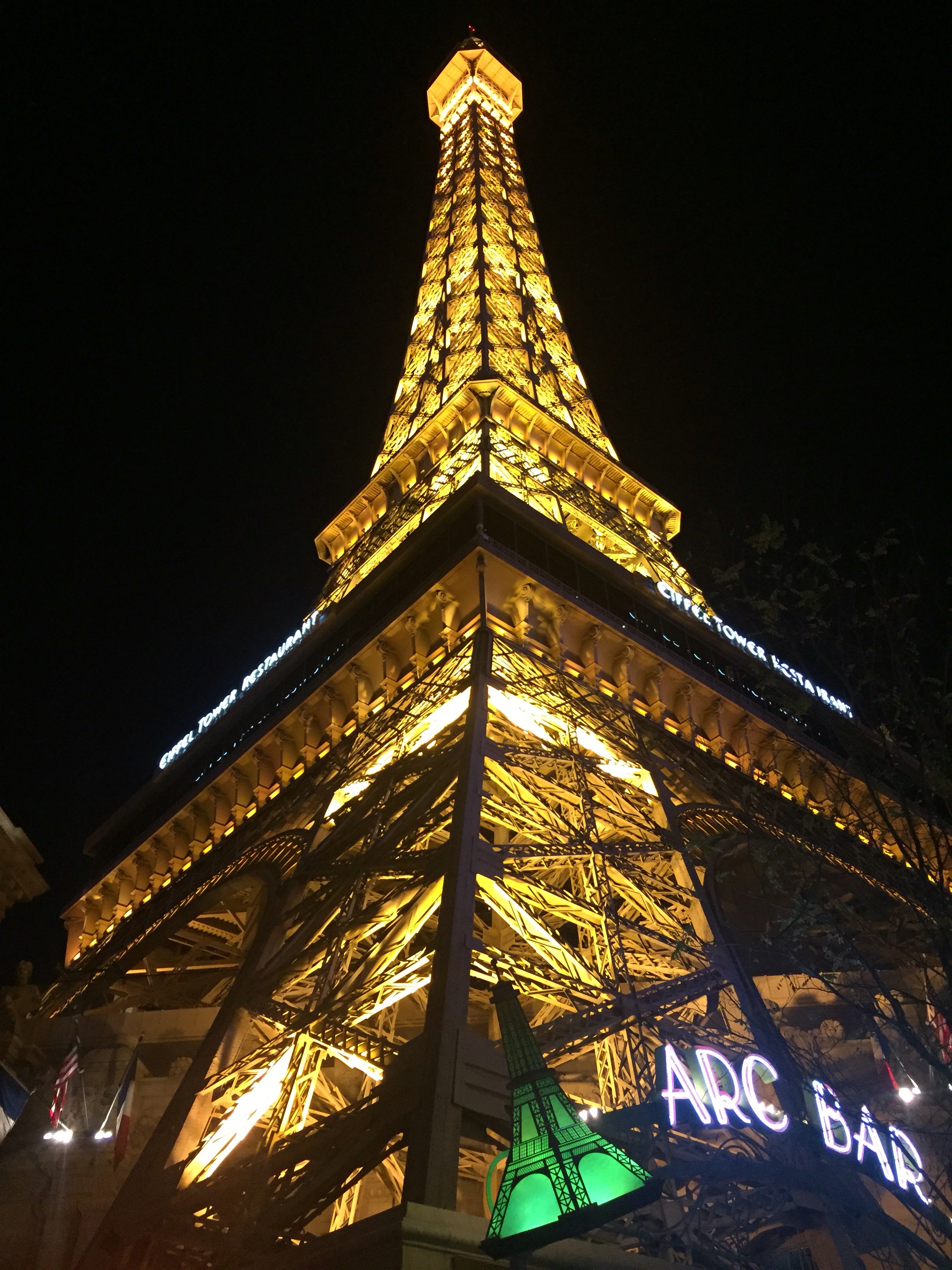 New York resorts, paris resorts, you name it! Not only they are beautiful, but the hotels price are affordable, so need not worry about whether or not it cost alot, because it is not expensive.

If you go straight along the las vegas strip, this would be the end of the point. Many tourist would come here just to take a picture of this las vegas sign. 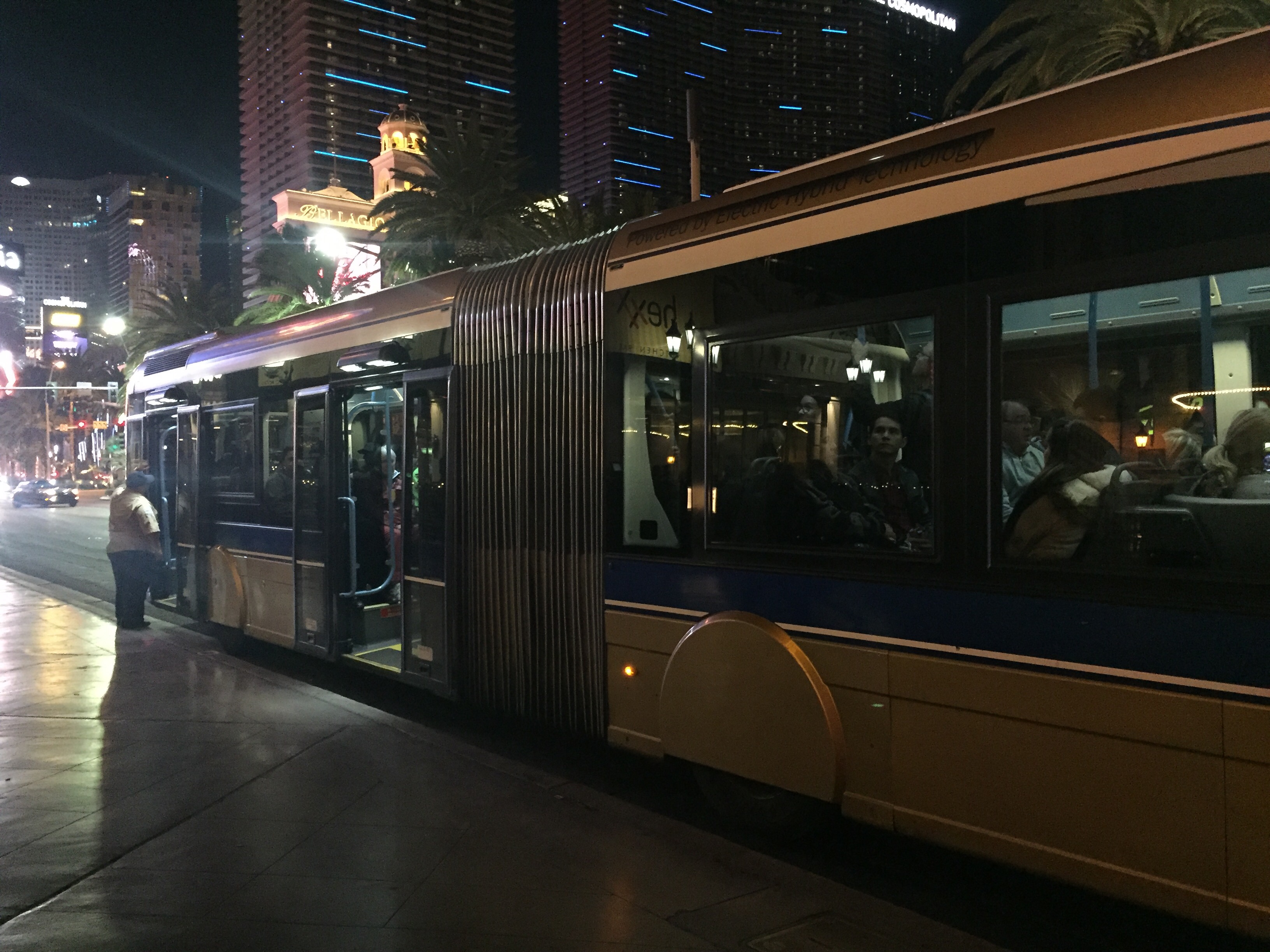 You will need more than 2 hours walk in the strip, so I suggest you to take Deuse Bus from Fremont street, and the price of 24 hours bus ticket is USD8 and 2 hours for USD6. 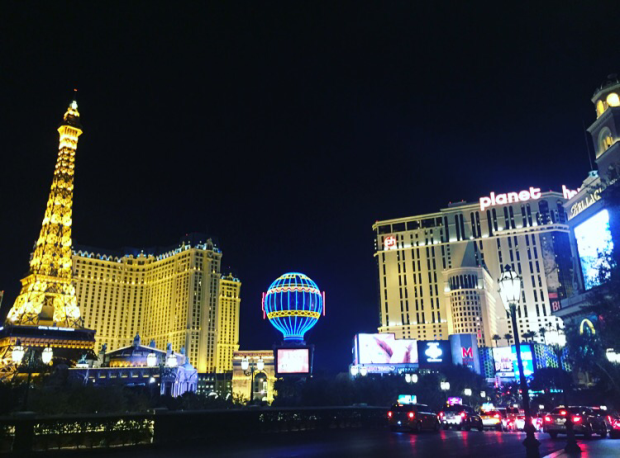 And this is definitely one of my most favorite view. You could take this shot right in front of Caesar Palace, you could spot this beautiful scene all along the way!

New York is all about the streets, the lights at night, the tall skyscrappers, and one of the way to enjoy this magnificent scenery is by having yourself a helicopter ride over the city. 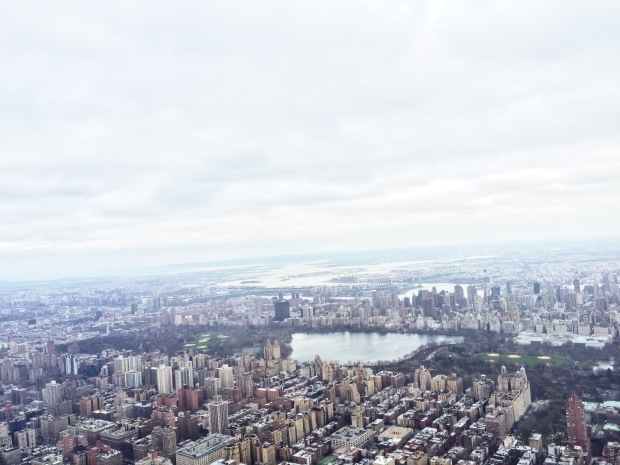 I still remember how beautiful it looked that day, fine weather, sunny, flying above Manhattan and over the Statue of Liberty. 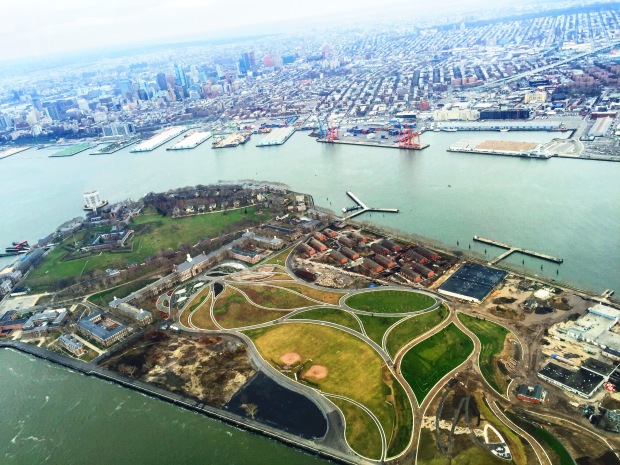 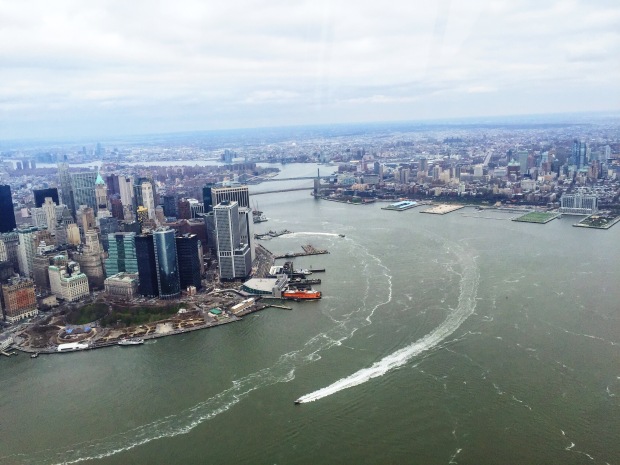 The New York Helicopter ride is located on 6 East River Piers, New York, NY 10004. The heliport is very close to Wall Street or the financial district. 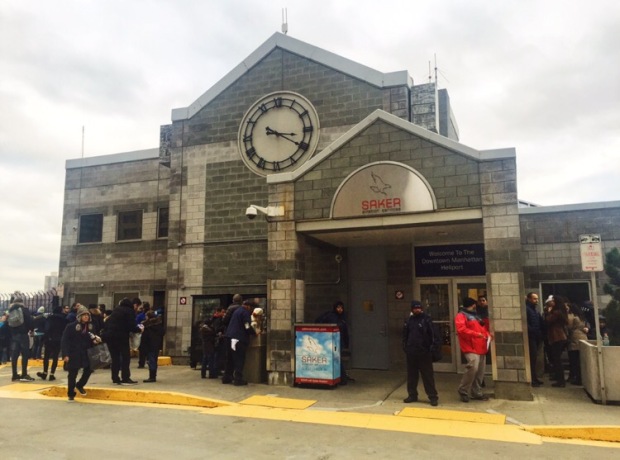 If you are interested, you could email them for booking to info@newyorkhelicopter.com or dial 212-361-6060.

The price varies depending on the length of time, but approximately is around USD150. You could check Groupon in case there are promotions. 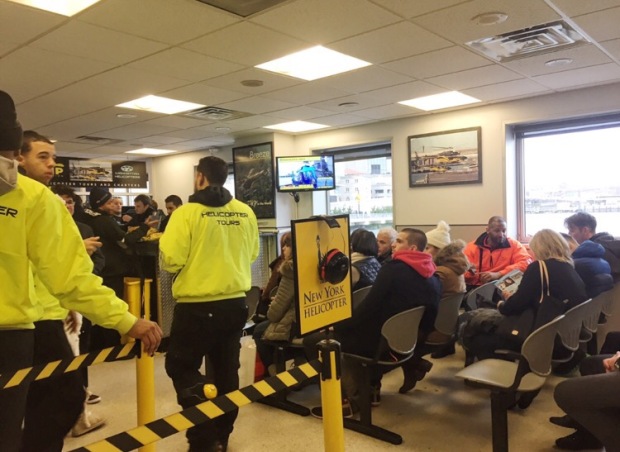 Gratitutes to the pilot are very appreciated, and remember to bring it with you, because your bags would be stored in a locker when you fly. 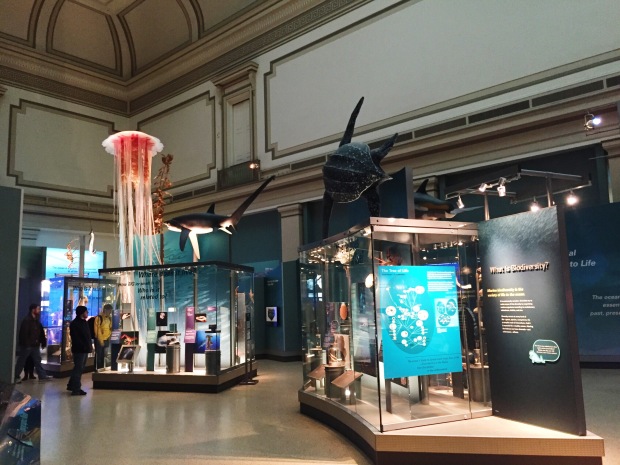 This is the second largest natural history museum after the biggest one in New York.

You don’t need to pay for admission because it is free, and the museum is located on 10th St. & Constitution Ave. NW; Washington, D.C. 20560

There are many sections divided in this museum. You would find the areas of Human Origins, Ocean Hall and Mammals on the First Floor.

Then Mummies, Insects, Gems, Diamond, Fossils and Dinosaurs in the Second Floor.

There would be not only skulls, skeleton or preserved creatures, but some living animals could be found in the museums, such as the butterfly live show, fishes in the aquarium.

My most favorite section is the butterfly areas. There is a special room filled with living butterflies, and if you are a butterfly lover, be sure to check this out, however, you will need to pay for the live show!

This is different from art and history museums, and is more related to our surrounding and everyday lives, so I think that it could catch your attention more.

You might need at least more than one hour for a quick glance, but three to four hours time are enough.

It would be nice if you could make some contribution by sparing some of your money as a donation to this museum. 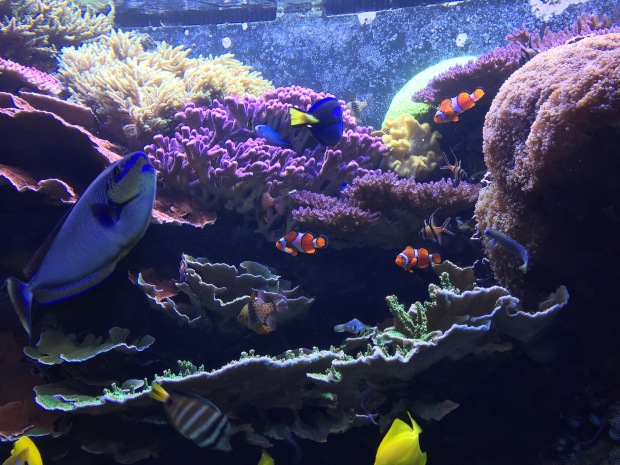 You do not need to give much, USD 5 is recommended, but it is appreciated if you could give more!

There is no way skipping Harvard in your itineraries if you are in Boston. However, since the university is not small, I think it is wiser to have yourself a guide.

Just in front of the Harvard Square, you would find Harvard tours which usually started at 10.30am, 11.30am, 1pm and so on. The duration is around 1 hour and cost only USD10. 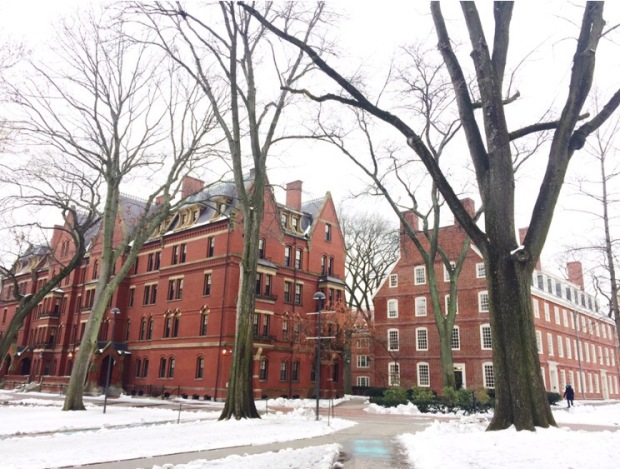 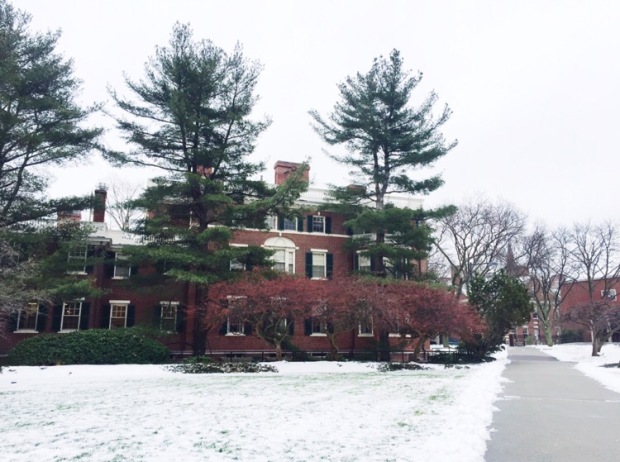 Harvard Square is just like a market, which is surrounded by cafes, restaurants and shops in this area. 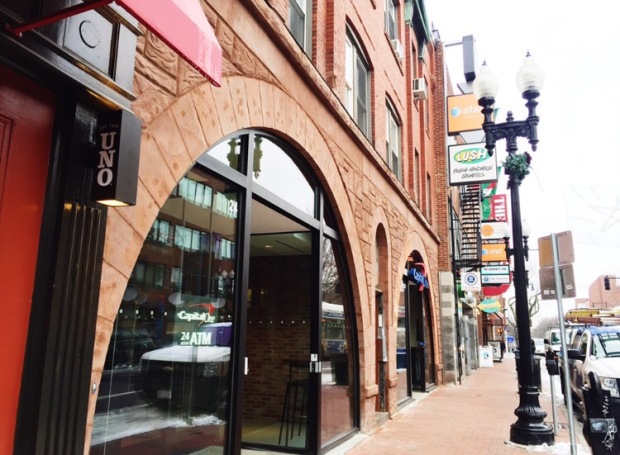 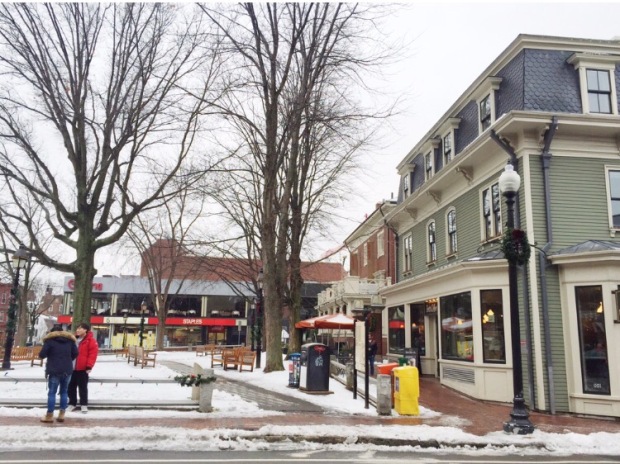 There are starbucks, but if you would like to find yourself somewhere different to chill, then you definitely should try the Crema Cafe.

Yes, Crema Cafe is very famous and also have quite a pretty long line in the morning. They serve great foods and also have a nice atmosphere, enjoy your day in Harvard!

Bonjour! I have always liked the idea of being a local in a stranger’s land. Waking up early like most of them, and spend my day like how they used to.

I went to Boston Public Garden early this morning. The Garden is located in downtown, so it is very accessible if you stay in this area, such as Stuart St, Washington St.

This public garden was established in 1837, and is the country’s first botanical garden.

You will see these four status along the way from the garden entrance gate. There are around 80 species of plants and 40 types of exotic trees in this garden.

However, since it is winter time, you would not be able to see the beauty of the flower blooms.

Meanwhile, there is a lake in the center of the garden, and due to winter time, the lake is half freezed.

A bridge is built in the middle of the lake, allowing visitors to pass by the sides of the garden.

One of the popular attraction of Boston Public Garden is the Make Way For Duckling Statues of Mrs. Mallard.

You could also find an ice skating rink in Boston Common, which is right across the Boston Public Garden, and the rink is known as Boston Frog Pond.

The ice skating rink only opens and available in the winter time because of the cold. In summer, it is open as a pool. 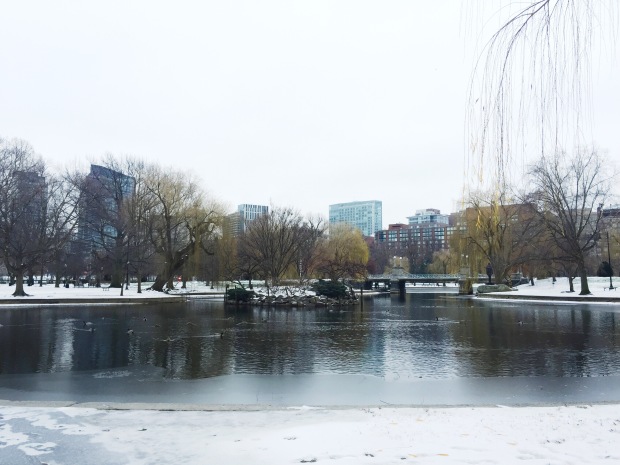 It is always a great idea to start your day with all the nature and fresh air surrounds you. Hope you enjoy your morning walk!

Boston city is known for its many scholars, college, universities, and that is why it is very common to meet many young people all around the world.

Boston is a small city, and in this blog I will show you how to get around downtown Boston and the famous Quincy Market if you only had one night.

If you arrived in South station by taking Greyhoubd bus, you will see big Chinatown gate just straight in front of the terminal.

According to census, there is a high population of Asian Americans living in this area of Boston,  and it is one of the most densely populated residential areas in Boston.

Walk straight toward the Chinatown gate, and you all along the way you will encounter many chinese and vietnamese restaurants and stores in that area.

After the end of the Chinatown, we will be heading toward Washington street. There would be plenty of fashion stores and retails in this area.

The streets are usually filled with people, especially students. However, due to the strong wind and also snow in this week, many preferred to stay at home and which is why somehow the road looks quieter than usual. 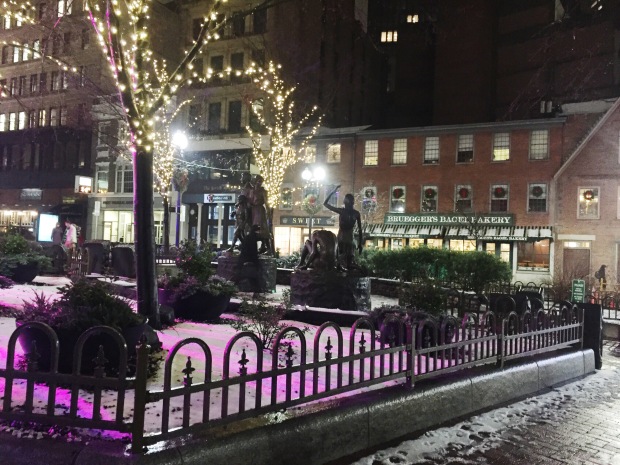 During Christmas time, lights are filled everywhere on the corner of the streets.

Not only fashion stores, but cafes and bars are easily spotted. Not only Starbucks, Dunkin Donuts, but there are also many local taverns and pubs.

You will encounter this area, one of the biggest street in Boston, where cars and people were passing through left and right, almost like the Shibuya in Japan.

One of the mosty popular bar near the Quincy Market is the Union Bar (Union Oyster House), it is actually famous for its oyster and lobster. 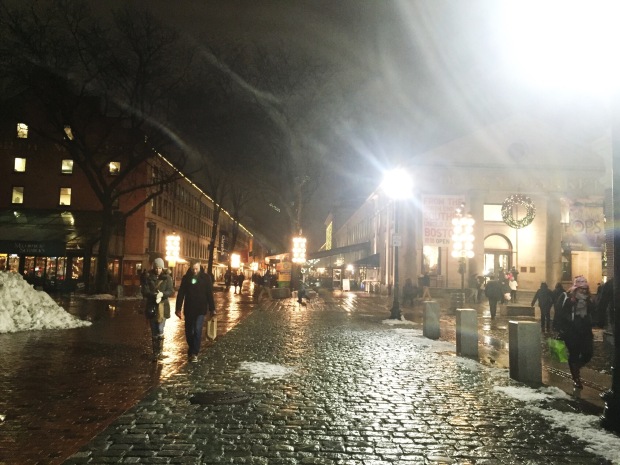 After around 20 minutes of slow walk, you will reach the Faneuil Hall Marketplace or known as Quincy Market. 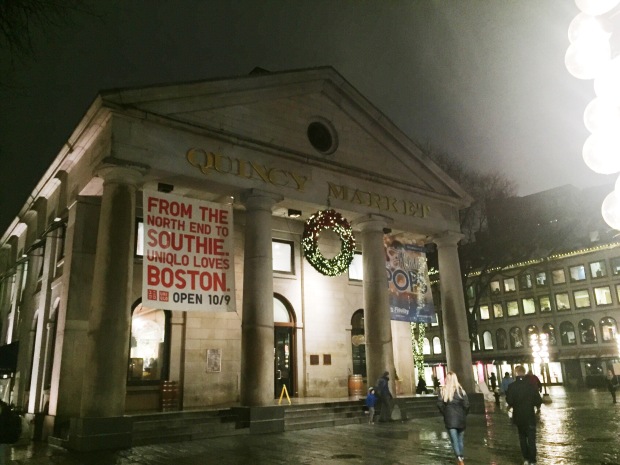 The Quincy Market opens 10am until 9pm from Monday to Saturday, and 11am until 6pm on Sunday. 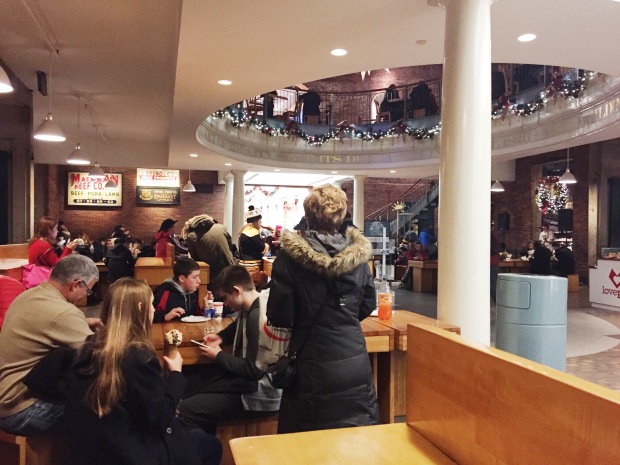 You can have your dinner in the middle of the market. Sometimes there would be live music performance here.

Not only that, there are also stalls that sold accessories, souvenirs and even Harvard Campus apparel. 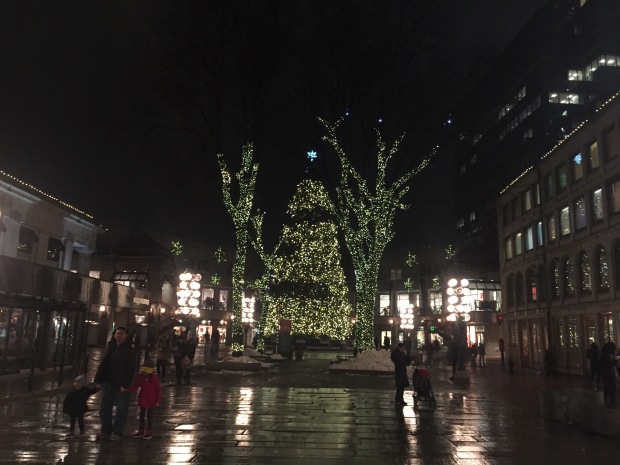 There is also a big Christmas tree decorated with lightbulbs in the centre of the market.

You would only need around 2-3 hours for the night, and I suggest you to walk around by foot rather than using busses because sometimes there would be traffic as the streets are very small.

Sometimes it is quite difficult to find a parking lot as well, so why not walk around exploring this city?

If you are planning to come and visit San Francisco but at the same time you are also having limited travel budget, you could try Free SF Tour!
What is a Free SF Tour? It is a fully guided walking tour, starting from Union Square, continued to Chinatown, Financial District, and then Port of San Francisco.

What is the best thing about this tour? The best thing is definitely because it is FREE and the tour guide Filip is a very fun and caring person!

We learnt alot from this tour, especially the history of San Francisco, and what’s exciting is we are able to meet new people and even make friends from the tour. 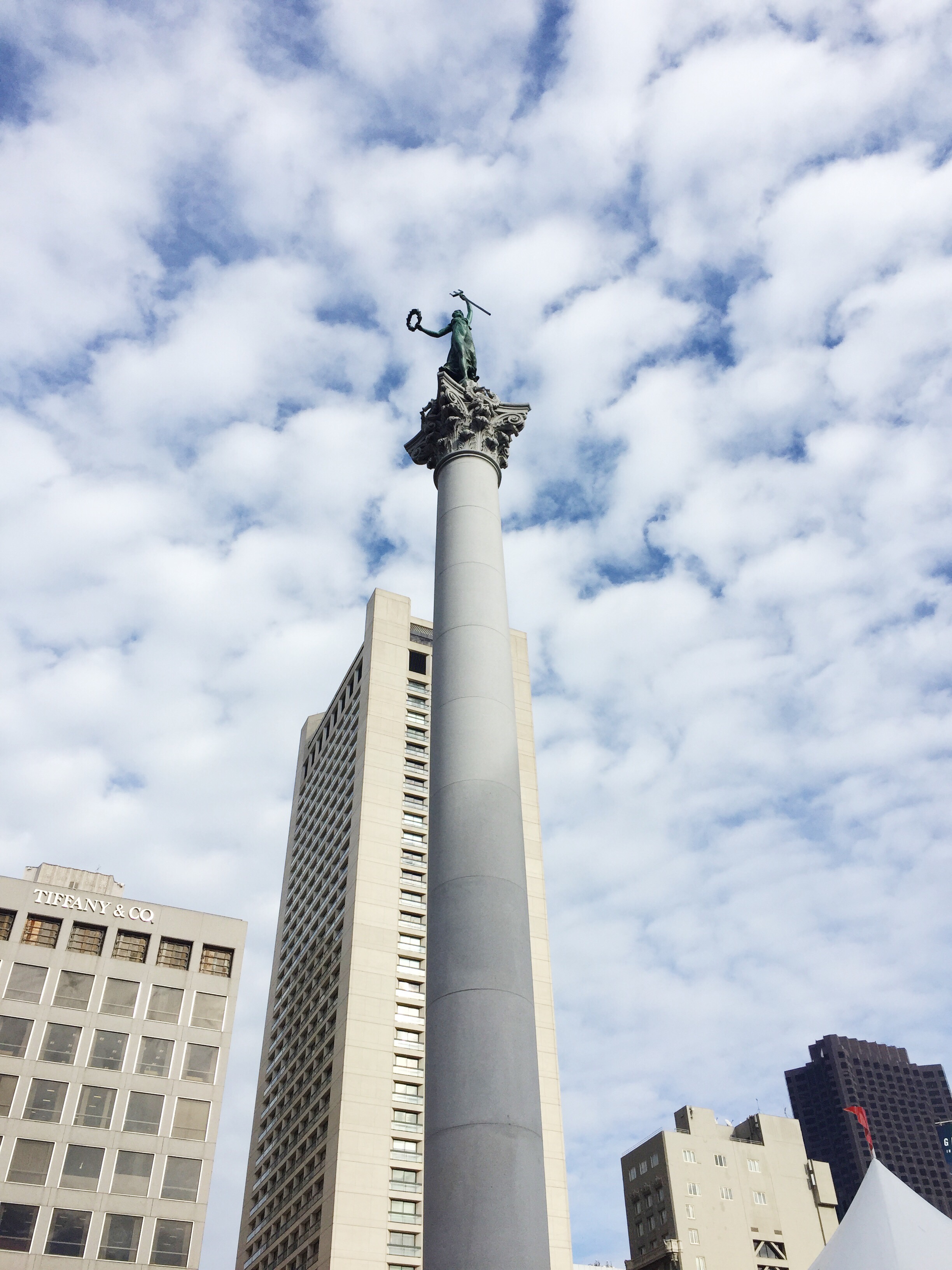 The tour starts at 10 oclock in Union Square, and you do not need any bookings or appoinment, so you would just need to come and find Filip in the Union Square, just right in front of the ‘Heart’ of SF.

Although it is free, the tour guide is definitely professional, also gratitutes are very appreciated at the end of the tour.

In addition, there are 10 bucket lists of things you ought to do while in SF, unfotunately Filip only gave it to those who joins the tour with him, so I wouldn’t be able to share em to you! Enjoy the tour!

Since you are in Hollywood, why not pamper youself for a night?

Dress yourself up, put on high heels, get into a limo and have yourself some parties!

Recently I have used the limo service from LoveBoat, their standard is USD 150 with 4 hours minimum and gratitutes, so total is USD 720.

You could have all you can drink of champagne, vodka and boozes in the limo.

There are many kinds of limousines available and the price are different. There are limos for 6,8, and even 16 passengers! 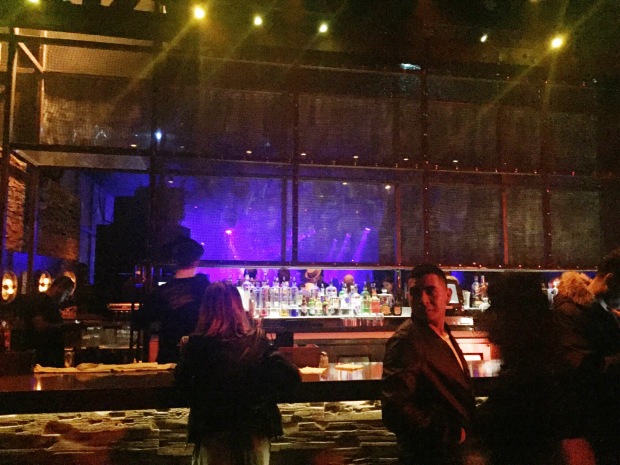 and you even get free entries to clubs in Hollywood!

No queues are needed, and definitely treated like a VVIP!

Enjoy your celebrity night out in LA!