Have you wondered what to dine while in South Korea? I have prepared 10 unique Korean dishes that you must tried while you are there, and they are all local cuisine.

Be aware that most Korean do not speak English, especially seniors, so I have also attached the Korean Characters of the food which might probably be a good help for you while doing order. Make sure you tried them all!

Remember to say 잘 먹겠습니다 (Jal moke get sum nida) before you have your meal. 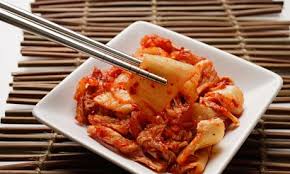 All of us definitely have heard about Kimchi, it is a fermented korean dish made by various of vegetables. There are over 200 varieties of kimchi recorded according to my source while I attended my class in Kimchi Academy, but the most common kimchi are made from radish, napa cabbage and cucumber. Restaurants will always serve various of Kimchi for complimentary, so don’t bother to order.

The taste of Kimchi depending on the vegetables and seasoning itself, some are spicy, and some taste sour. However, the most favorite kimchi is this napa cabbage kimchi, you could find this Kimchi in almost every restaurants in Korea. How does it taste then? It has a sour and little spicy taste. Kimchi is not only eaten with rice, but some also mix Kimchi in their cookings, such as in pancakes or even soup.

You might find the taste a little weird if you have never had Kimchi before in your life, because Kimchi is not served while hot, mostly are kept in refrigerator, so many exclude kimchi in their meal because they are not used to having cold vegetable dishes. Every restaurants kimchi taste slightly different, so it is worth a try!

Tteokbokki is a popular Korean food made from soft rice cake, fish cake with sweet red chili sauce, and you could easily find tteokbokki sold in stalls and street foods. FYI, tteokbokki was a part of royal cuisine in Joseon Dynasty, and the older type of tteobokki is savory, while latter version was much spicier, which then becomes more popular than the traditional tteobokki.

The name japchae means “a mixture of vegetables” (jap means “mixed and stirred”) and (chae means “vegetables”), and may be served hot and cold. However, Japchae is usually cooked with sweet potato noodles, it was stir fried in sesame oil with vegetables (sliced carrots, onion, spinach) and served with beef, and cooked with soy sauce and sugar.

Bibimbap is usually served in a hot stone bow white rice topped with sautéed vegetables, egg, sliced meat, chilli paste, soy sauce, or a salty soybean paste. You will need to stir everything until it evens, then you can start tucking in! The taste might be a little strange to you due to the chilli paste, so I suggest you to have a taste of the chilli paste before you stir them all. 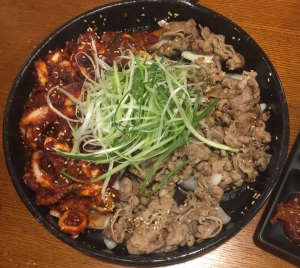 Bulgogi means Fire Meat, it usually made from thin slices of beef and marinated before cooking (soy sauce, sesame oil, garlic, pepper, ginger). Bulgogi sometimes are served with lettuce, so you could wrap them together with sliced onions, and whole cloves of garlic and eat them all together. You could add chilli sauce or sesame oil if you would like to have more flavors.

6. Budae Jjigae 부대찌개
Budae Jjigae is also known as an Army Stew, due to food scarcity in Seoul after the Korean War, and the surplus foods from U.S. military bases, such as hot dogs and hams, the food were then being consumed together with Korean traditional flavor and cooking style, and this was how Budae Jjigae was ‘invented’ accidentally.

Kimchi is added in this Budae Jjigae

Samgyeopsal is commonly served as an evening meal consists of thick slices of pork belly meat that could be marinated or not seasoned. We could grill the meat ourselves and eat directly from a grill in the diner’s table. You will need to dip the grilled meat into sesame sauce for a better taste of Samgyeopsal!

According to source, “historical records on galbitang are found in records on table setting for Korean royal court banquets held in the 1890s. However, galbi, was assumed to have been eaten since the end of the Goryeo Dynasty (918 – 1392).”

If Galbitang is soup from beef short ribs, then Seolleongtang is a broth soup made from ox bones (mostly leg bones), brisket and other cuts. The process of Seolleongtang making is not different with galbitang, which is to simmer the ox bones for over a period of hours and even entire day in a low flame. The simmering process is to ensure the flavor from the bones could be gradually extracted.

Usually Seolleongtang is not seasoned in the process of cooking, so you will need to add salt or any flavors according to your taste. It has a cloudy and milky appearance on the top of the soup, and is eaten with rice (the rice is sometimes added directly to the soup)

Samgyetang means chicken ginseng soup and usually refered as an energizing soup. Samgyetang is extremely popular during summer days, as nutrients can be easily lost in summer due to excessive sweating. In the making process, a whole young chicken filled with garlic and rice, scallion and spices is boiled in Korean Ginseng Broth.

Also you will need to add some seasoning according to your own preference, such as salt, white pepper. Samgyetang taste slightly the same with our home made chicken broth, only Samgyetang has a distinct ginseng flavor. The dish is also usually accompanied by side dishes and sometimes a small complimentary bottle of insamju will be served in some restaurants.

You could save the names of meat in Korean to help you in ordering the other dishes:
Fish 물고기 mulgogi
Beef 쇠고기 chwi gogi
Chicken 닭고기 dalq gogi
Pork 돼지고기 dwaeji gogi

And don’t forget to say 잘 먹겠습니다 (Jal moke get sum nida) after you finish your meal!